Jump into life this June with Can Too 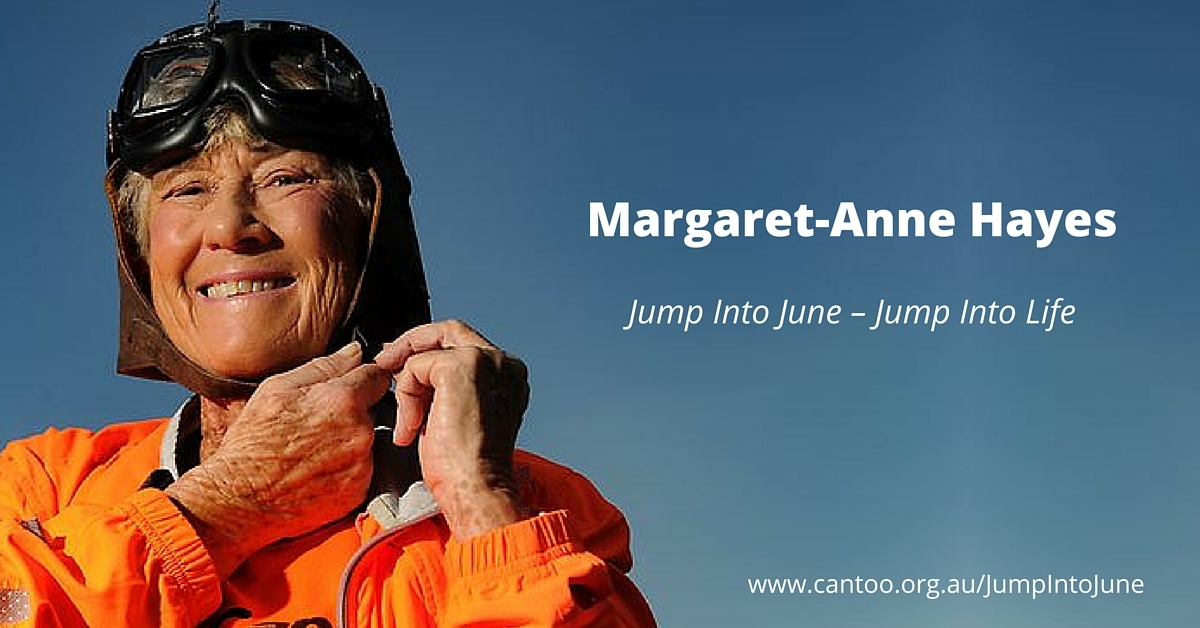 The brand new event will be raising money through the Can Too Foundation for cancer research programs run by the Kolling Institute’s Bill Walsh Translational Cancer Research Laboratory.

The event has two components: Jump into June, and Jump into Life.

Margaret-Anne Hayes has fundraised over $200,000 for Australian early career cancer researchers through the Can Too Foundation. Previously she has held two very successful Balls, shaved her hair, held film, trivia and social evenings.  Organised dinners for ten, cooked business lunches, made chutney and jams.  She has held a weekend Designer and Gift weekend and in 2013 jumped out of a plane.  Well actually tandem sky dived with a gorgeous Italian ex-paratrooper which she swore she would never do again as she is terrified of heights.

This year brings a new determination to raise an additional $100,000 for a cancer research project at the Kolling Institute which, important and ground breaking as it is, has had to be shelved because of a lack of researching funding for the grant. Margaret-Anne will be sky diving, again with the same gorgeous Italian, from 15,000 ft. – a whole 1,000 ft higher than her 2013 sky dive on Sunday, 26th June.

Margaret-Anne will be joined on this jump by various high flyers (pun intended) in the medical, business, retail and corporate worlds, along with the odd politician or two.  Not, of course, that any of our politicians could be labelled as 'odd'. A fundraising goal of $100,000, if achieved, will bring Margaret-Anne within only $200,000 of her dream of raising half a million dollars by her 80th birthday in (less than) four years time.

The second part of the event – Jump into Life – Is for those, who would still like to be part of such an event without committing to skydive.  It is suggested that fundraisers to-be jump out of their comfort zone, and into June.

Take on a challenge like learning to drive, signing up for a Can Too program, learn to swim, learn another language, complete a triathlon, walk over the Harbour Bridge, abseil, dive with sharks.  Whatever challenge has been waiting in the wings for the right time.  By so doing, you will fundraise towards cancer research through Jump into June – Jump into Life. Bonus prizes will be awarded for the highest fundraisers.

Donations over $2 are tax deductible and receipts will be issued by the Can Too Foundation.