I Can Too for my family

First time Can Too participant Linda Hughes (pictured above centre) will be ticking off what’s been on her bucket list forever – her first half marathon this weekend in Hawke’s Bay, New Zealand. But, the number one reason she’s running is not for herself but for her family.

“I Can Too because my whole family has cancer, I’m out here running for them,” said Linda.

Her father has advanced lung cancer, her mother leukemia and her sister’s been diagnosed with breast cancer, which happened whilst she was training for the Hawke’s Bay race.

As it’s her second attempt at training for a half marathon, she was searching for a group to run with, after running five or six kms a week she wasn’t progressing.

“I didn’t think I could do long runs on my own so I found Can Too and I’m really happy I did, it was meant to be,” said Linda.

“Because cancer has been popping up everywhere, my whole family is suffering from it and a lot of my extended family has had it as well.

“So to be able to give back with fundraising and supporting such a good cause, that’s what I’m doing it for.”

Her father was a big runner, he used to run ultra-marathons, marathons, bush trails and climb mountains.

“He never stayed inside, he’s the most active person I know, now he can’t do any of that as he’s quite sick.

“When the run gets tough and you think you can’t keep going, I just think about my family and other people that can’t run as they have cancer.”

Her coach Beth Williamson and fellow Can Tooers from the Northern Beaches pod (training group, pictured below) have been a great inspiration to not give up, as she’s had to nurse shin splints and Plantar Fasciitis.

“I love my northern beaches pod, everyone is friendly, considerate and looks out for each other, it’s very social too, we’ve had some nice breakfasts and pubs night.

“I also think it’s great that you get to chat with Annie Crawford on the run, I’ve enjoyed getting to know her and Edith Hurt has been a big motivator, as we’ve been running together, it’s been a good experience.” 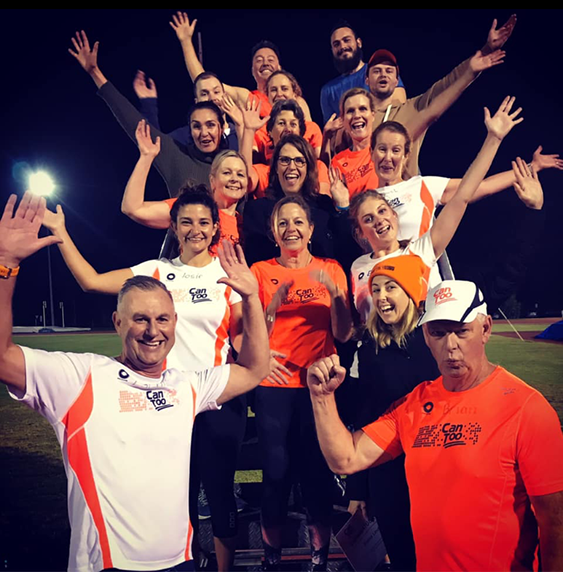