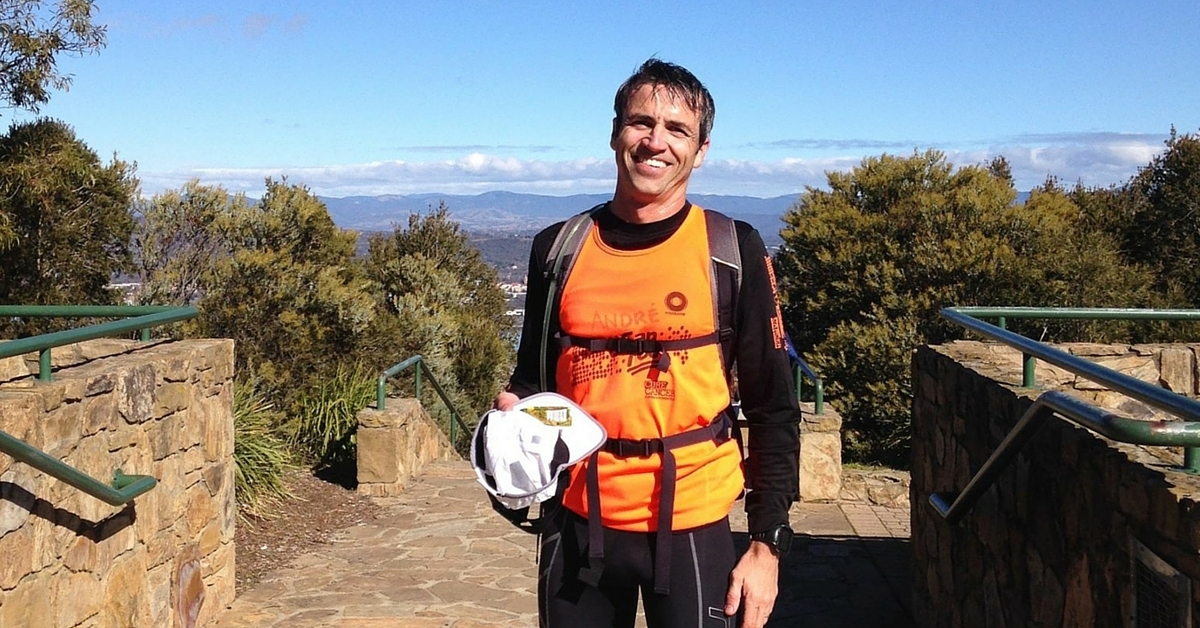 It’s not every day you find yourself coached for a Half Marathon by a man whose professional interests also include “quantum chaos” theory. Canberrans are in for a special treat this winter as Dr Andre Carvalho, a research fellow at ANU and a professional running coach for Can Too, is leading the charge.

Andre has been a professional running coach since 2012, and recently completed (amongst other things) twelve marathons in twelve months fundraising for cancer research through our Can Too Beyond program.

What first got you into run coaching?

Since I was young I have always practice sports, especially team sports: football (soccer), volleyball, basketball, handball … running and swimming came relatively late in life and my first race was the Canberra Marathon in 2009. In the following year I joined the Novice Program with the Canberra Bilbys Triathlon Club and fell in love with the sport. Being a researcher and teacher, I was immediately drawn by the chance of learning more about the sport, teach and help others achieve their goals. It was this convergence of my love for teaching and my passion for triathlon that turned me in to an accredited Triathlon Australia coach.

What drew you toward the Can Too community?

It was Fiona, who coached me as a novice triathlete, that introduced me to Can Too. She was contacted to coach Can Too’s first Canberra pod but at that point she wasn’t able to run long distances. She asked me if I would take the SMH Half marathon group while she coached the 10km program. Until that moment I didn’t know what Can Too was. After a little bit of research, I couldn’t believe how lucky I was for the opportunity to contribute a bit to the amazing work done by Can Too. The combination of fundraising for cancer research and at the same time promoting a more active and healthy lifestyle hooked me immediately.

After our last long run before the SMH Half Marathon, our pod gathered to talk about race expectations and also about the journey raising funds for cancer research. That was when our Energy Champ asked to say a few words. She thanked everyone for their effort for such a good cause. She then revealed, with her two kids by her side, that she was a cancer patient herself and that the money raised was helping research to increase her life expectancy. That hit me so hard that I immediately decided that I needed to do something special.

Driving back home I was thinking about what to do. I decided to do something impressive, something that I would never do if it wasn’t for the fundraising. I thought of doing a long term project, just like the treatments that my friends and relatives went (or are going) through. That’s how I came up with the 12 marathons in 12 months idea.

There were so many wonderful moments along the way. Emotionally, marathon 3 was the highlight. Running in my hometown (Rio de Janeiro, Brazil), sharing the road with family members and friends, going through roads that brought back so many memories, and finishing off at the Christ the Redeemer statue was really special. Physically, the highlight was marathon 7, which was completed after a long triathlon.

The were certainly moments of pain and fatigue and the lowlights were in marathons 4 and 11, where I ran 49km and 51 km, respectively. I had to walk up quite a few hills in these races and finished exhausted in both of them.

You tacked on a marathon to the end of a triathlon? Please explain!

I always wanted to do a long distance triathlon and early in 2015 I registered for the Triple Edge Endurance Triathlon with the distances of 4km swim, 120km bike, and 30km run. This was before coming up with the 12 marathons idea.

With the triathlon race on 14 December, I didn’t want to run a marathon the week before and neither the week after. That would leave only the week between Christmas and New Year’s eve, which I thought wouldn’t be a good idea. It was a friend of mine that suggested that adding 12 km on top of the official 30km of the race was a great solution to my problem. Maybe she was being sarcastic, I don’t know … the point is that I accepted the challenge and completing it was my proudest moment in triathlon races.

What’s your favourite thing about running through the winter in Canberra? How do you keep yourself engaged/motivated?

I was raised in the tropics so winter is not my thing. Having said that, Canberra winter, although cold, usually has clear sunny days and I love this. When winter comes, the biggest change in my running routine is to move my midweek runs from early mornings to lunch time. My favourite lunchtime workouts are interval training around one of the ANU ovals, trail run up Black Mountain, and running to Lake Burley Griffin and back.

Like many runners, you’ve had knee trouble in the past. How did you get through it?

I’ve been through many injuries in the past but I had never had a knee injury until just after marathon 2. Joint problems are scary, especially when it is the first time and you don’t know exactly how to react. I went to the physiotherapist to diagnose the problem and then followed an exercise routine to strengthen my muscles. What I learned with the injury was that, with one marathon a month, I needed much more recovery than I had initially planned. Since cycling didn’t hurt my knee, I replaced a lot of my running sessions by bike rides to maintain my fitness level.

Blackmores Half is starting … how are you feeling?

I’m really excited! I’ve just been through 12 months of running where I learned a lot about my physical strengths and how to overcome my limitations. I know that Can Too runners in our program go through a similar process and I can’t wait to be part of it and help them achieve their goals.
Previous
Next