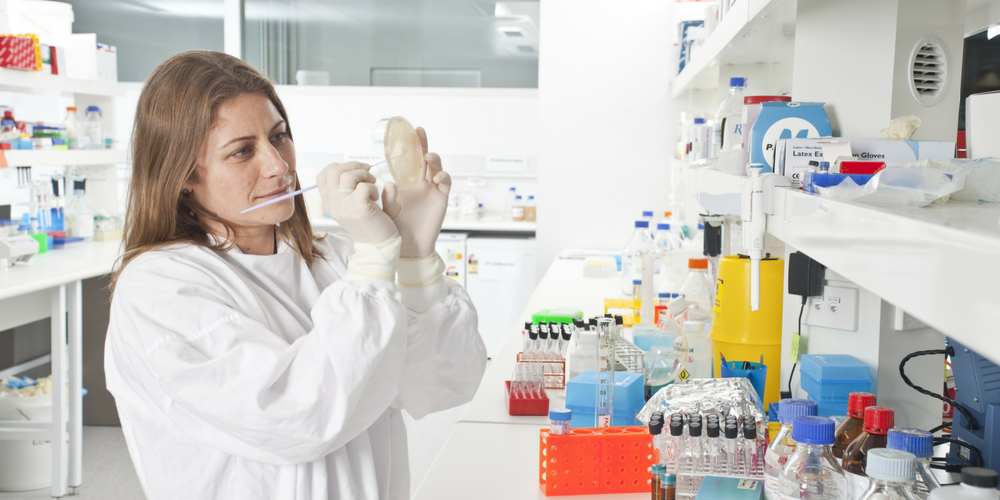 In January 2006, Dr Megan Hitchens received the first ever cancer researcher supported by the Can Too Foundation. Since Megan's grant, she has become an Associate Professor of Medicine (Division of Oncology) and the Laboratory Head for the Hitchins’ Translational Epigenetics Lab at Stanford University, and what was at the time Can Too Run – 86 people training for Blackmores Sydney Running Festival with a goal of raising $100,000 for cancer research – has grown into the Can Too Foundation, principal supporter of Cure Cancer Australia, raising $17 million to date.

Much of A/Prof Hitchins' work over the past 12 years since that initial grant (then based at St Vincent’s Hospital in Sydney) has focused on genetic and epigenetic causes of cancer risk and outcomes.

Looking At DNA in a New Way – To Find An Answer

In research published in 2011 while co-leading studies at UNSW’s Lowy Cancer Research Centre, Megan and her team discovered an entirely new way that bowel cancer can be passed down in families.

Lynch syndrome is an inherited disease that accounts for 5% of all bowel and uterine cancers. Researchers knew that two-thirds of cases were caused by a genetic mutation, but were puzzled by what was causing the remaining cases.

After studying a three-generation family with several members affected by bowel and other cancers, Megan showed that a subtle change in the DNA elsewhere was acting as a magnet, attracting the paralysing proteins that prevented the gene from working properly.

The researchers wanted to understand what was causing methylation – a natural process that normally helps control which genes are expressed and which are not – to switch off a gene called MLH1, which is supposed to help prevent cancer developing.

Megan said at the time:

"The ‘typo’ acted as a biochemical tag and attracted methylation to a certain spot where the anti-cancer gene was sitting," she said. “It acted as a magnet, to attract this chemical that switches the gene off.”

The breakthrough could help identify other families at increased risk or even pave the way for drugs that stop methylation occurring and switch the anti-cancer genes back on.

Megan and her team have since proven this same change leads to Lynch syndrome in several additional families. Excitingly, it is very likely that this new cause is also responsible for a wide range of other familial cancers, such as familial breast or prostate cancer. This ground-breaking research could create an entirely new genetic test that would help families with a history of cancer to understand their cancer risk and get diagnosed early.

On what this finding means for those with Lynch syndrome, Megan said:

“The impact of this research on people with Lynch syndrome can be quite profound. They can finally know what’s causing their cancer, and screen all their family members to identify and remove pre-cancers before they become malignant.”

Where To From Here?

Today, from her base at Stanford University, Megan’s research continues to focus on the genetic and epigenetic causes of cancer risk and outcomes, with clinical observational studies as well as molecular pathological epidemiology studies in cancer patients.

When she is not in the laboratory, Megan enjoys spending time with her husband and 3 year-old daughter exploring the beautiful Californian scenery, preferably by bike, kayak or on foot, and enjoying the arts and culture in San Francisco.

Over the past 50 years, Cure Cancer Australia has funded 316 scientists, 483 research projects and invested close to $27.5 million in research grants.

Megan’s important and world-class medical advances demonstrate how supporting our brightest research minds early in their careers can lead to cutting-edge discoveries and improve patient survival. Providing a research grant to a scientist early in their career not only financially makes it possible to keep them in the lab, it often gives them the confidence to know their research and work is vital and making a real difference.

As Cure Cancer Australia celebrates its 50th anniversary this year, we look back on all we have been able to achieve with the generosity of the community and we look ahead to how much there still is to be done, starting with keeping our brilliant young researchers in the lab, focused on finding a cure for every cancer, for every Australian.

We cannot cure cancer without you.