Congratulations to the 145 Can Tooers who realised their dreams of completing an open water swim at the 2021 Sydney Harbour Splash, the 1 and 2.5km goal events of the Autumn Swim Program. The school of swimmers also excelled in their fundraising efforts to raise $135,000 for cancer research which is more than $30,000 over the original amount pledged.

First time Can Tooer, 55-year-old Annie Kenyon (pictured below) exceeded her expectations at the event by coming second in her age group in the 1km swim. Her excitement swelled especially as she hadn’t undergone any official swim training since she was 16-years-old. 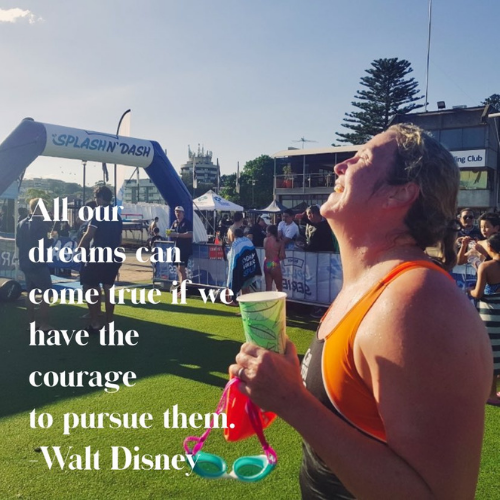 Asked how she felt after making it onto the podium, she replied ‘absolutely joy filled and so damn proud’.

“Who’d have believed that a woman in her 50s could be standing on a podium for doing a swimming race! It was so exciting,” she said.

Annie has now become a swimmer for life after completing the Autumn Swim Program. She is now regularly training in the Can Too swim squad and is eyeing off doing the Can Too Heron Island Swim Challenge. 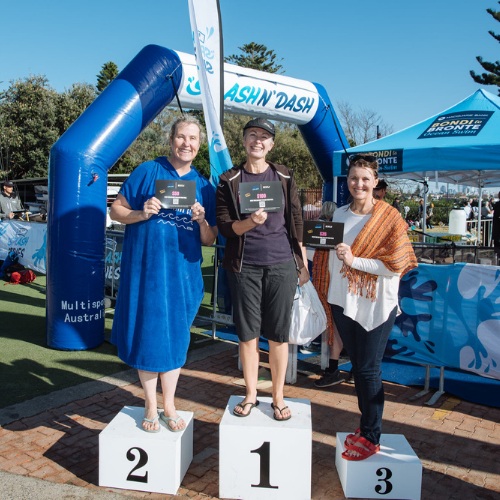 The Autumn swim program was also the first official ocean swim training that Can Too cancer researcher and Ambassador Emmy Fleuren had taken part in. She joined the Can Too program as a win win, to give back to Can Too who has funded her research, to raise funds and awareness for cancer research and to get fit.

Find out more about her Can Too journey by watching the below video about how she swapped her lab goggles for swimming ones to become a Can Too swimmer and Ambassador and how she is achieving goals in the pool and in the lab.

Can Too are thrilled that after supporting her work into improving the cure rates for children with sarcoma, Dr Fleuren has now received a 2021 Early Career Development Fellowship grant from Cancer Institute so she can continue to shape the future of childhood cancer research.

For Can Tooer, Robert Line (pictured below with Astrella) the Sydney Harbour Splash was the first time he had swum 1km in the open water, without stopping. He took on the challenge even though he’d never been a confident swimmer, as he lost his dad to cancer four year ago.

“If there’s something I can do to prevent someone else losing their dad to cancer I’m going to go for it,” he said.

He joined the program with his partner Astrella who also overcame her fear of swimming in the ocean.

She said that the best thing about the Can Too program is the community.

“The Coaches really drive that community culture, and everyone comes together. Even though I was terrified, as soon as the Coaches, TCs and Mentors were there I felt supported and felt that now I can do this,” said Estrella.

“My Favourite Can Too moment was joining the Autumn Swim program after the Sydney Summer Swim training where everyone came up and gave me a hug and said that they were so proud of me for being there, it was such a nice family.” 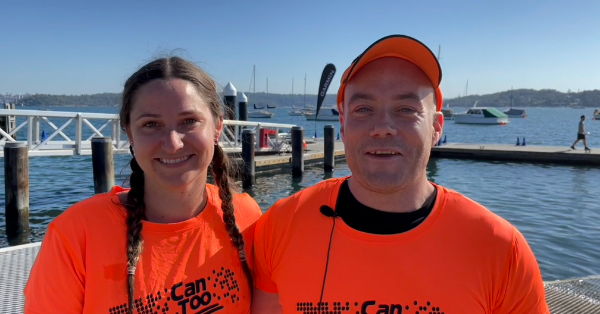 Congratulations to Can Too Coach, Samantha Wolf for winning her age category at the Sydney Harbour Splash and coming 10th as the overall female in the 5km event. The result is even more impressive as Sam believes that she went off course by about 600 metres.

“It was one of the most challenging courses I’ve done. That’s the beauty of Can Too we build up swimmers to face these challenges and do their best,” said Sam.

“My next challenge will be to conquer the Blackmores Half Marathon

Samantha recently featured in the ‘Call of the Deep’ article by Wally Mason in The Australian on Friday 30 April. The article explores how the popularity of ocean swimming has increased in the past year since the Covid pandemic began. 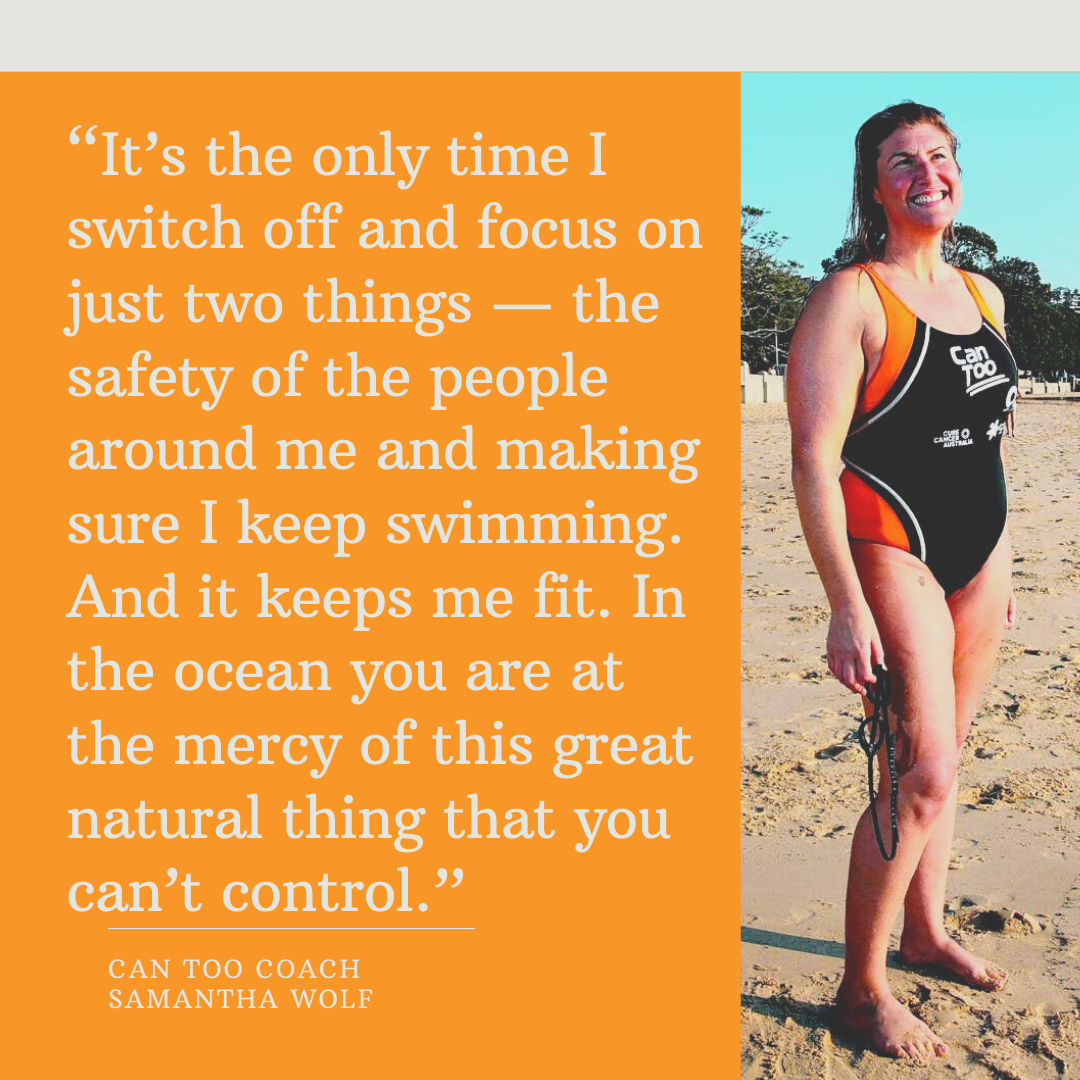 Can Too dominated the 1km swim race podiums with a first, second and third in the same age category by Susan Cohn, Victoria Kvisle and Sandra Levenston respectively. Beverley Kable also won her age group!

Congratulations also to Wendy Boyd (pictured further below) who came third in her age group in the 5km swim event. 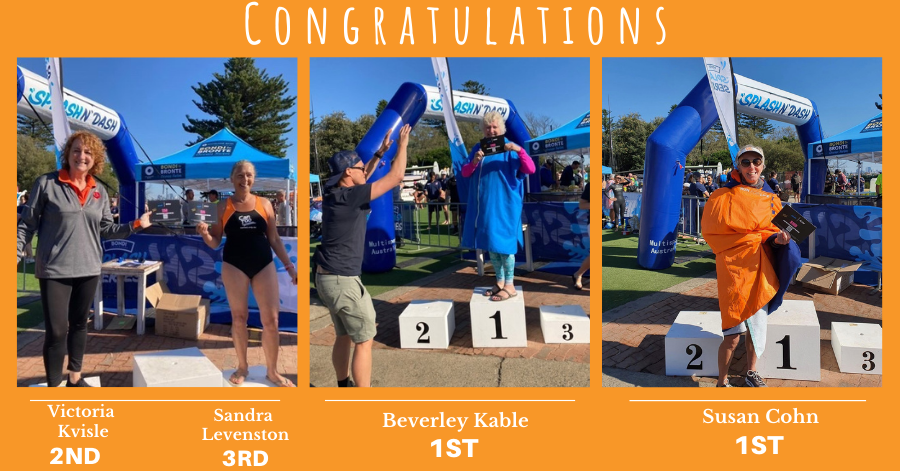 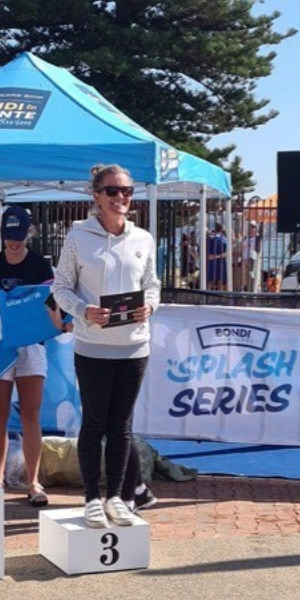 Congratulations to Kim Smee who won the Autumn Swim program’s I Can Too Challenge, see one of her inspiring and in her words ‘goofy’ posts below about her Can Too journey to achieve her goal at the Sydney Harbour Splash. 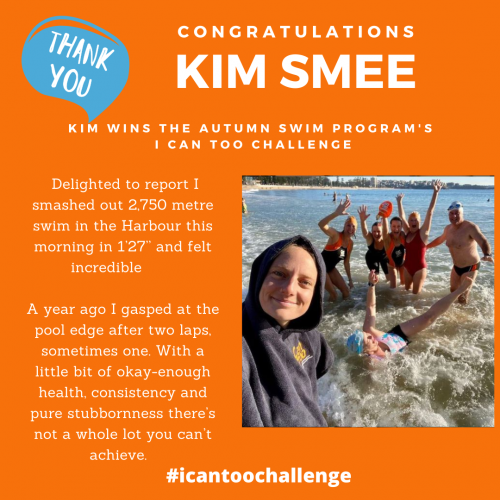 See more of the action from the day with a short event video and collage of Can Too photos below.

Thank you for being part of the Can Too Community for helping us to beat cancer and achieving goals you once thought impossible.