Cathy takes everything in her stride 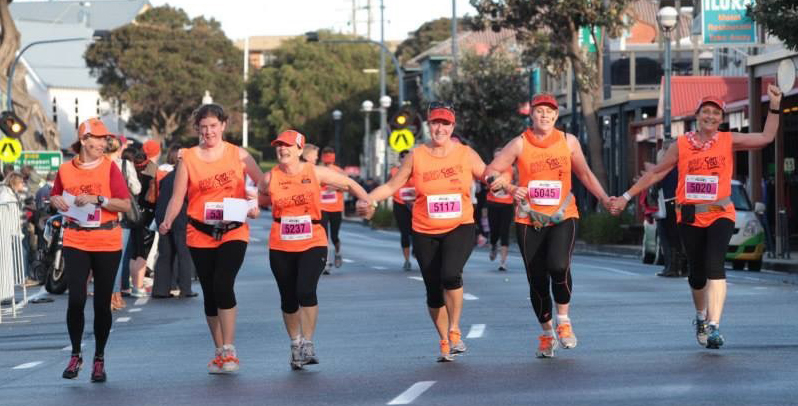 Prolific Can Too participant and mentor Cathy Duloy (pictured above second from right) takes her challenges in her stride, be it training for a half marathon, an ocean swim, a trail run – or beating cancer twice.

The Life Member started her journey with the Can Too Foundation training for the SMH Half Marathon, she is running her 10th SMH on Sunday – her 26th program. She is in remission from having had breast cancer.

“I thought of the cancer treatment as like doing an endurance event, like a half marathon, you take one step at a time and eventually you’ll get there and you might be suffering while you’re doing it, but you’ll get thought it,” said Cathy.

She puts her resilience down to the support and training she receives from Can Too.

In 2012 the 50-year-old was training for the SMH Half Marathon when she noticed a lump on her breast during a shower post-gym session; within a week she was in surgery and had to take seven months off work to undergo chemotherapy treatment.

“It’s a huge shock, your world changes straight away. Looking back, I don’t know if I would have got through that period without my Can Too friends and also the fitness that I had going into it.”

Her Can Too teammates would visit her, bring her flowers, take her out for coffee, and send her messages all the time.

“All of that stuff really helped. Can Too really means so much to me because of that support.”

She was determined to return to running, after suffering muscle wastage from chemo treatments she built up from walking five minutes a day and doing gentle rehab exercises with a trainer.

Her comeback to running with Can Too, within a year of her diagnosis, was completing the 2013 Great Ocean Road 14km run.

“Crossing that finish line together with my five Can Too friends holding hands was a really special moment (pictured above).

“We were all women of a similar age who became so close, they all recognised they were supporting me to come back to something I really loved and it was an important part of my recovery.”

She credits her effective recovery with the base fitness that she had built over the years of training in orange, which included ocean swim programs as well.

“All my doctors said that you’re so fit and healthy, so you’re going to be fine and they all commented on how well I recovered from the surgery and chemo from the basics of my good health and fitness.”

Then in 2015 she received the bad news that the cancer had returned.

“I won the bad lottery and got a different type of cancer in the other breast.”

She had to have another mastectomy, but they caught it early enough so she only had to have surgery, so it was less time in recovery, and she was back running within a few months.

“You never know when something will happen to you, you’ll get a broken leg or cancer if you have good levels of cardiovascular fitness and good metabolism to start with you’ll cope much better.”

The Head of Public Policy, was so enthusiastic to become part of Can Too from the start in 2008 as it was a way to honour her father who had recently passed away from cancer, never realising that she would be one to benefit from and give back to cancer research directly.

“I feel that the health outcomes for women who have early stage cancer are really positive, an important part of that is the fantastic treatment we have in Australia and all the research that’s been done.”

During her treatment she also donated her cells to the Kolling Institute, who has been funded by Can Too, to give back to cancer research.

She has also raised nearly $40,000 for Can Too and now helps her fellow CanTooers raise funds for cancer research.

“I said to my team once this is a pretty hard-core fundraising technique to get breast cancer twice and would not recommend it to people.”

When asked how she keeps running when she finds in tough, she replied ‘I don’t like to let the Can Too Team down’.

“There’s usually two or three of us at the back of the pack and if someone doesn’t turn up it makes a really big difference. If I don’t turn up I might stuff up someone else’s run.”

Good luck to Cathy and all the Can Too runners on Sunday. 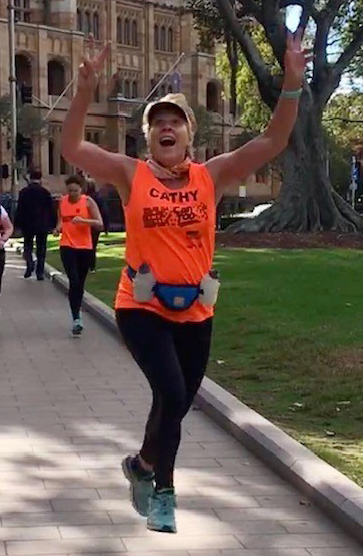