You Can Too win a new car 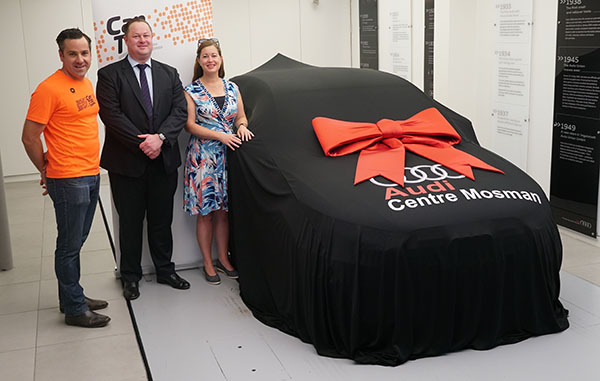 Congratulations to Tara MacEachern who won the winning prize in Can Too Foundation’s Annual Art Union Raffle – a brand new car. She drove her new Audi A1 Sports car valued at $41,810 home from Audi Centre Mosman on Saturday, see the video below.

Audi Centre Mosman, General Manager James Phillips presented the keys to Tara and Can Too Foundation CEO Peter McLean was there to congratulate her on her winning prize.

Peter made the surprise call to tell Tara that she’d won a new car, after the raffle was drawn on 21 November. She then told him that she’d never even won a meat raffle before.

The Program/Project Manager at the Children’s Cancer Institute said that she felt ‘absolutely amazing’ and too excited to drive home after hearing the news.

“It’s surreal as I never expected to win,” said Tara.  “I just wanted to support an awesome charity.”

The raffle raised $40,000 with the profits invested in Australian cancer research and prevention.

The car makes an extra special Christmas present as Tara has never owned a new car before.

“This makes the experience of winning all the more special.”

Tara was inspired to buy the ticket for her birthday. She heard about the raffle as she had donated to the Foundation previously to support her friend who completed a Can Too learn to ocean swim program.

Thank you to the Autosports Group and Audi Centre Mosman for their support of Can Too and to everyone who entered the raffle.