4 life lessons I learned from training with Can Too 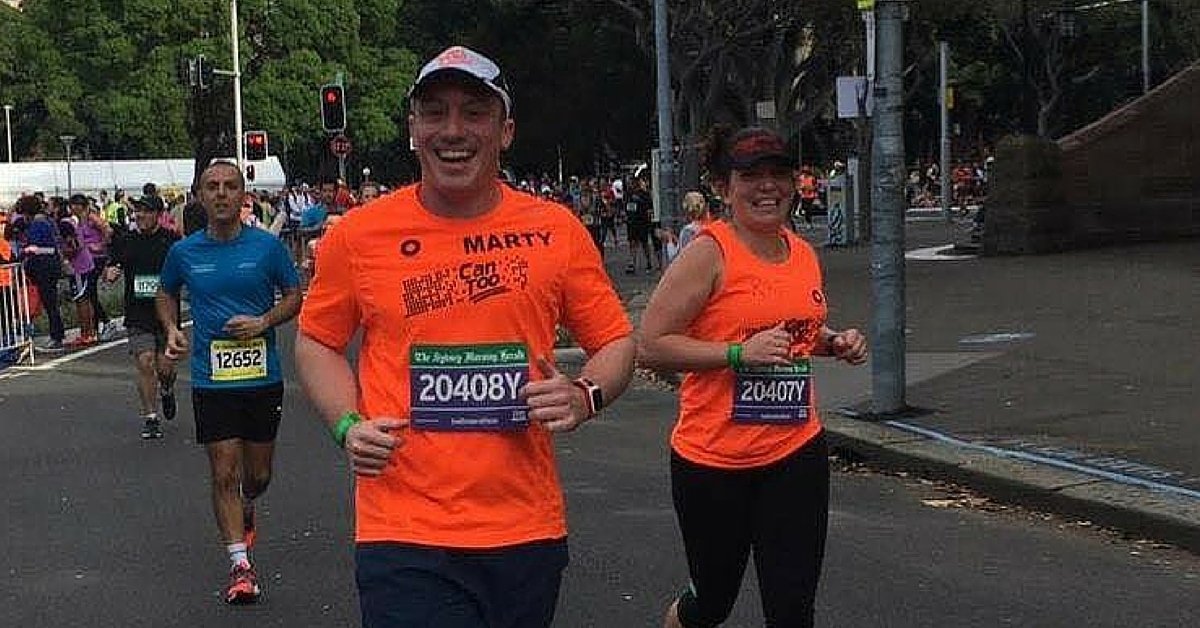 I ran in the SMH Half Marathon two weeks ago. It was an emotional day for lots of reasons, the largest being a) successfully crossing the finish line, but also b) I proposed to my girlfriend as she crossed the finish line. I’ve had time to reflect on what I’ve learned about life, love, and happiness in general since joining Can Too.

In late 2014 I came across a charity swim program that boldly promised “train for a challenge you never thought possible”. And four months or so later, after a summer spent training in ocean conditions great and grim, I successfully completed five ocean races. Which brings me to my first point …

It’s not easy to join a group of complete strangers for a training program, in a sport you’ve never been gifted at, to see what kind of toll the years have really taken. People fear joining a gym. I was doing this, in a swim suit. It takes courage.

“We are our own greatest surprise.”
— Paulo Coelho

But I turned up nearly every week, because that first group I trained had what all the Can Too groups I’ve been a part of have – a strong culture of peer support. Which brings me to …

Lesson #2: You get out what you put in

I spent my 20’s moving to progressively smaller and smaller towns, with the final two years on a tiny tropical island in the Gulf of Thailand. When I moved back to Sydney, my local community went from (an at-times disturbingly small) 5,000 people to (an at-times crushingly anonymous) 5,000,000 people. It took some getting used to – so I looked for communities within my community.

“You can't stay in your corner of the forest waiting for others to come to you. You have to go to them sometimes.”
— Winnie the Pooh

One morning in Bondi I came across One Wave – a non-profit community who started Fluro Friday as a conversation-starter about mental health, and came back just for the talks and a morning swim. I re-joined CrossFit, something I loved when I lived in Thailand. But eventually I came across Can Too, which became my steady community, and a life-changing experience – not because they did it for me, but because of what I’ve been empowered and supported to do for myself. I’ve become an ocean swimmer, I’ve become a runner, compared to what I was two years ago, I feel like I am an endurance athlete. Which brings me to …

I’m passionate, I’m driven, and I’m impatient. I’m a sprinter. What I’ve learned is sprinting will not only get you there quicker – it won’t get you there at all. The greatest joys I’ve learned through Can Too is the slow-burn of the journey. Sustainable change happens slowly. It’s rewarding learning that the race is me against … me. And we’re all there to help each other reach our personal goals.

“Life is not meant to be easy, my child, but take courage: it can be delightful.”
— George Bernard Shaw

I’ve learned to celebrate the little victories, because great things start small. When I started with Can Too, the process of turning up to the pool every Wednesday, and the beach every Saturday, and facing whatever the weather threw at us, is a victory in and of itself. I learned my limits. I learned where to push, where to pull back. I learned a lot about myself as a person. Which brings me to …

Lesson #4: Believe in yourself

I’ve learned that I have to believe in myself. I have to trust myself. And to do that I have to better understand myself. I’m not 20 any more. I’m not invincible. I’m not a peak performance athlete. Recovery takes longer. Any gains I make take longer. But I have to keep moving, because progress is inertia – once it starts, it wants to keep moving. I have to celebrate the little victories. I have to put one step in front of the other, and another in front of that, and if I don’t get to where I’m going, that’s not failure. It’s a detour. Where I once saw roadblocks, I now see speedbumps. Instead of dead-ends I see detours. And if I have to, I will simply come back and try again.

“As soon as you tell yourself you are a runner, you become one.”
— Annie Crawford AM

My next challenge is training for the Blackmores Half Marathon. It’s a long road ahead, but I’ve learned courage, I’ve learned perseverance, and I’ve learned pace. And after that? Time will tell.