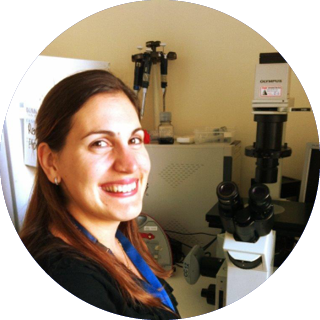 Zaklina aims to use Can Too Foundation's support of her cancer research to change all that. In her research at Sydney University, the 32-year-old scientist focuses on how cancer disseminates from primary tumours to distant sites in the body. Specifically, in her work in the Molecular Pathology and Pharmacology Laboratory, she is studying a molecule known as NDRG1, which has been shown to inhibit the spread of cancer. “We aim to understand exactly how it functions and how we can use it,” she explains.

To that end, already, Zaklina and her colleagues have deciphered some of the mechanisms by which the molecule functions, and have used the knowledge to develop new agents that have been shown to inhibit aggressive pancreatic cancer very effectively. Even more exciting for the team is that the agent recently entered clinical trials for advanced cancers.

Advancing Our Understanding of How Cancer Develops

The discoveries have led to multiple publications and new projects in Zaklina’s lab. She believes they will significantly advance understanding of how cancer develops and hopes they will contribute eventually to the development of agents that eventually can stop cancer from spreading completely.

In her work towards this goal, Zaklina tries to embrace the qualities she believes successful researchers need: patience and perseverance. “It can be frustrating when something isn’t working, and, more often than not, the results we get aren’t very exciting,” she says. “But once we get that big breakthrough, it’s extremely rewarding.”

Zaklina, who completed her PhD in January 2011 at the University of Sydney, was first motivated to engage in medical research by a documentary she watched at school – about a young boy who was suffering from AIDS.

“There was something about it that really touched me and inspired me,” she says. “I became fascinated by cancer and that passion and curiosity led me to where I am today.”

A Message of Hope

Meantime Zaklina believes researchers’ work should not only seek solutions that can stop the disease altogether, it should also help to improve the quality of life for patients, encouraging them to stay positive and never losing hope. Zaklina points to new breakthroughs that are being made every day, and the many cancers that are already treatable.

This is a message Zaklina would especially like donors and fundraisers for the Can Too Foundation to heed. They enable scientists to make a difference, to do vital research into a disease that affects so many people. In addition “the grants provide a bridge for young investigators seeking to become established and independent in their fields”, she says.

“The achievements of many Cure Cancer Australia grant recipients are remarkable and highly valuable” she adds. Zaklina worked with the University of Sydney’s Professor Roger Reddel when she was an undergraduate and he has been a great source of inspiration.

“Some of my colleagues, excellent and highly dedicated scientists, have unsuccessfully competed for this funding, which further highlights the high calibre of the competition. I feel so fortunate I’ve been give this amazing opportunity.”

Having recently become a mother for the first time, her life, not surprisingly, has changed dramatically. “It certainly put things into perspective – my favourite thing now is to spend quality time with my family and enjoy precious moments.”

Zaklina considers herself fortunate to have a rewarding career and loves her job, which is “more like a hobby than work”, she says. “I believe you should follow your dreams and do something you’re really passionate about, not what will earn you the most money. This was something my parents always told me and I am so glad I followed their advice.”

Dr Zalkina Kovacevic was a 2017 Cure Cancer Australia grant recipient supported by the Can Too Foundation.