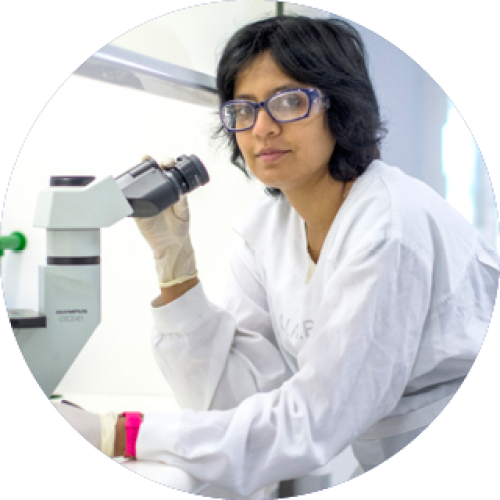 Having lost a close cousin to the ovarian form of the disease, Dr Rochelle D’Souza never allows herself to forget that just about everyone, including donors and fundraisers, has been affected by cancer, if not themselves then via family and friends.

Her message, in her own words, “to the special people who donate to organisations like this is that little drops of water make a mighty ocean. Every dollar raised counts and supports scientists who are at the frontier of identifying new, innovative treatments,” says 33-year-old Rochelle, an early-career researcher at the Translational Brain Cancer Research laboratory headed by Dr Bryan Day at QIMR Berghofer in Brisbane.

The affliction for which Rochelle is determined to develop better treatments and boost survival rates is glioblastoma, the most common and aggressive primary brain cancer that results in around 1,000 deaths a year in Australia. Despite decades of intensive research into the biology of brain cancer, there’s been no real meaningful change in the overall average survival rate of patients (about 15 months) in the past 30 years.

Along with colleagues, she is examining a protein known ephrinA5 which binds to its target protein EphA3. EphA3 is elevated in glioblastoma and other cancers. Because it transmits molecular signals when it’s activated by ephrinA5, she believes the protein as well as its “signalling route” is an attractive target for research.

“I’ll investigate what signals are activated by ephrin A5 and identify novel druggable targets that could better treat this disease,” Rochelle says. “We have innovative and powerful technology to profile thousands of proteins in one shot. Its application to study glioblastoma signalling therefore holds a lot of promise.”

Rochelle’s life as a student and researcher has spanned three continents. Born in Mangalore in India, she was heartbroken at a young age when her grandmother and mother’s uncle died from diabetes. That’s when she decided that she wanted to contribute to the enrichment of human life – “to know my work has made life easier for someone else”.

After being awarded a summer research fellowship by India’s Jawaharlal Nehru Centre for Advanced Scientific Research, Rochelle gained her master’s degree in Biotechnology at Mysore University before being accepted by a PhD program at the Max Planck Institute in Germany. She moved to Australia with her husband Navin in 2014 to start her postdoctoral career. She’s published nine papers.

In a refrain that will be familiar to researchers, Rochelle regrets the increasing funding challenges facing young scientists, and is “extremely thankful” for the Can Too Foundation's support.

“The past year’s been particularly hard, with many big labs unsuccessful at obtaining grants, that’s resulted in brilliant scientists losing their jobs,” she says. “We’ve probably missed out on countless discoveries because a precious trained and motivated workforce was forced to say goodbye to science for lack of financial support. But I believe that when one door closes, another opens; we must look for it.”

Rochelle and Navin love living in Brisbane, where she has rediscovered her love of the beach and body-boarding. Besides that, she enjoys travelling and learning new languages.

“Having been personally affected by cancer, I know how helpless one feels when a person or their family is given the diagnosis,” she says. “The good news is we’ve greatly increased our understanding of how cancer develops and it’s just a matter of time until we can win the battle against it.”

Dr Rochelle D'Souza was a 2017 Cure Cancer Australia grant recipient supported by the Can Too Foundation.

Investing in Queensland (QLD) View All