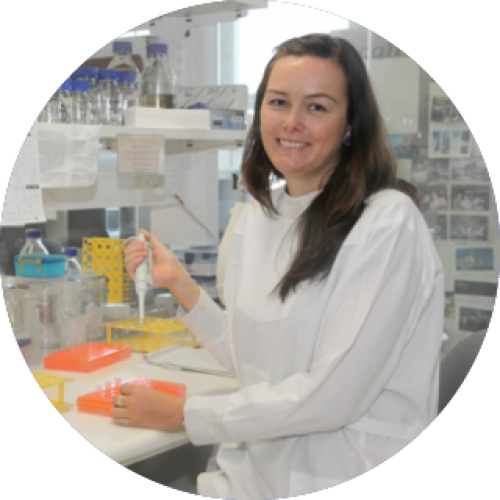 Dr Jill Larsen, Research Officer at the QIMR Berghofer Medical Research Institute, considers lung cancer to be one of the “underdogs” of the disease, despite it being the most common cause of cancer death in men and women worldwide. That may be due partly to the “stigma” resulting from its strong link to smoking, Jill believes.

No one should suffer the added burden of guilt or distress due to their disease, she says. Moreover, lung cancer is becoming a disease of former smokers and those who’ve never smoked.

“The fact that it’s so complex and diverse with such poor survival rates, and that patients may feel blame, are factors which have inspired my dedication to researching this disease.”

Jill, who grew up in Cairns and completed her PhD in 2007 at Prince Charles Hospital in Brisbane, began her research career in evolutionary biology, studying genes in coral. However, she soon realised her real interest lay in medical research, specifically cancer, which she describes as a fascinating and formidable foe. Just when researchers think they’re beginning to understand it, they uncover another layer to its complexity which spurs another decade of questioning.

Jill has spent over 14 years researching the genes that drive lung cancer. “When we analyse a patient’s lung tumour we find hundreds if not thousands of genes have been mutated,” she says. “Only a small percentage of these ‘driver’ mutations are critical for the development and continued growth of the tumour.”

Jill’s research uses a unique experimental model of normal lung cells that have been transformed into malignant cells by introducing a small number of known, but currently non-targetable “driver” mutations. This may help identify vulnerabilities in tumours which can lead to new, effective drugs.

Her work uses experimental models she developed during her postdoctoral studies with Professor John Minna at the Southwestern Medical Center in Dallas. Thanks to Professor Minna’s generosity, she brought these models back in 2013 to the QIMR Berghofer Medical Research Institute, where she aims to develop her own lung cancer research niche. “My ultimate goal is to improve the outcomes of patients with lung cancer.”

Praising organisations like Can Too Foundation and major beneficiary Cure Cancer Australia for filling a crucial void for young researchers desperate for such support, Jill considers her grant supported made possible by the support of the Can Too Foundation to be an “immense honour personally and professionally”.

“I also appreciate how much importance Cure Cancer Australia places on funding the scientist as well as the research. They have a genuine interest in the person behind the science, and offer many opportunities for career development. In my opinion, this sets Cure Cancer Australia apart from other funding bodies and makes their grants so prestigious.”

In the meantime Jill maintains the curiosity, zeal and optimism that’s an essential part of being scientist, while seeking to take time to see the world and appreciate people around her. Outside the lab she enjoys live music, exploring markets, gardening and restoring furniture.