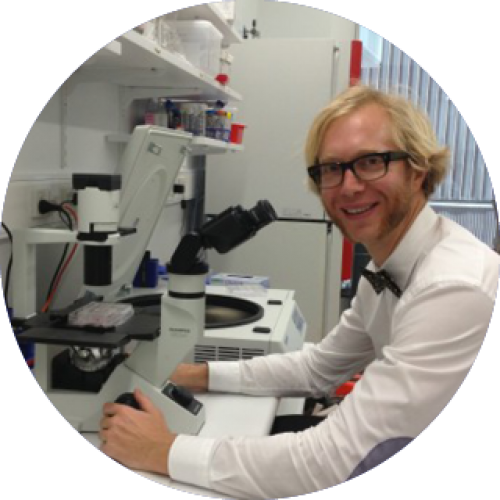 A long-standing problem in the field of medical science has been the need to bridge the gap between tissue culture and human biology. In most tissue culture systems, a cell’s interactions are either with the plastic vessel that holds them, or the culture medium in which they’re growing, says Dr Michael Doran, a scientist with the Queensland University of Technology’s Translational Research Institute. The plastic used to make tissue culture vessels is chemically similar to that which is used to make plastic toys or kitchen utensils – and the culture medium “is more similar to Gatorade than blood,” Michael observes wryly.

Over the past few years, Michael's team has focused on developing improved environments for tissue cultures. This has enabled them to make contributions to cartilage tissue engineering, bone marrow stem cell culture and cancer drug testing.

With the support of the Can Too Foundation, Michael’s Cure Cancer grant will directly support his efforts to make this thrilling prospect a reality, enabling the culture of bone marrow blood stem cells in a bioreactor system, and saving many lives.

Born in Canada, Michael completed a BSc (Genetics) and BEng (Chemical) at the University of Alberta. As an engineering graduate, he worked as a project manager for Exxon/Mobil where he directed the development of heavy oil fields in Northern Alberta. His passion for biomedical research eventually motivated him to relocate to Sydney and complete a PhD in biomedical engineering at the University of New South Wales in 2006, under the supervision of Dr Robert Nordon.

“I’d been infatuated by the concept that umbilical cord blood stem cells could potentially be grown in a bioreactor and improve bone marrow transplant outcomes,” he says. “I was lucky enough to be offered the opportunity to help develop such a bioreactor with Dr Robert Nordon, and I haven’t looked back!”

“The Cure Cancer Grant supported by the Can Too Foundation is ‘exceedingly important’ to Michael and his research team, giving them stable funding for two years and allowing them to focus on their work rather than writing to try for more grants (the paradox affecting most young medical researchers).

“This is the first grant I’ve won where the award includes the opportunity to meet and present to other recipients,” says Michael, whose research has been widely published. “I think that’s wonderful.”

Michael’s parents and siblings still live in Canada. In Australia, he likes to surf, but he’s terrible at it. “I also like to mountain bike, and I’m a bit better at this.”

The advice he’d give other young researchers is to seize opportunities, which he intends to continue doing himself.